Bulimia Nervosa is an eating disorderб which is characterized by the abnormal appetite and the constant feeling of hunger. A personб who experiences this disorderб eats much food in short periods of time; as a result, these people suffer from obesity and try to get rid of the food they ate by vomiting or taking laxative or other medicines (Nutritionist Resource, 2014). A cause of this disorder is still unknown; experts provide many different factors that may lead to the development of bulimia, such as emotional health, biological factors, or even social expectations. Bulimia may lead to more serious diseases and life-threatening complications, such as heart disease, absence of periods (females), tooth decay, dehydration, depression, and alcohol or drug abuse.

According to the American Psychiatric Association, a person diagnosed with bulimia should have the following symptoms:

Despite the fact that a person may not have these symptoms, he/she still may have this disorder. Hence, it is necessary to consult the professional and avoid the attempts to make the diagnosis personally.

According to this fact, bulimia nervosa is a disease that is difficult to discover, because a person may confuse it with his/her lifestyle or some inborn problem, such as obesity. However, ignoring this disorder may lead to the negative consequences for a person’s organism, such as development of more serious diseases, abnormal obesity, and emotional melancholy.

Get 15% OFF
your first order
with discount code: empire15
Order now

Bulimia Nervosa affects mostly women and girls rather than boys and men. This disorder appears in the teen age or in the early adulthood (Yager & Bienenfeld, 2014). Bulimia may be the result of the genetic link, in case if one of the parents has a disorder connected with obesity. Moreover, the psychological and emotional issues can also lead to the development of this disorder. Females are more emotional than males; their ability to react on every situation with more emotions has also negative consequences for their mental health. Hence, some problems in life may be viewed very seriously and on a high emotional level. Some of the person’s qualities or life positions may make the things worse. Hence, perfectionism, depression, anxiety, impulsive behavior, and low self-esteem ruin the emotional balance and work as a contributing factor. 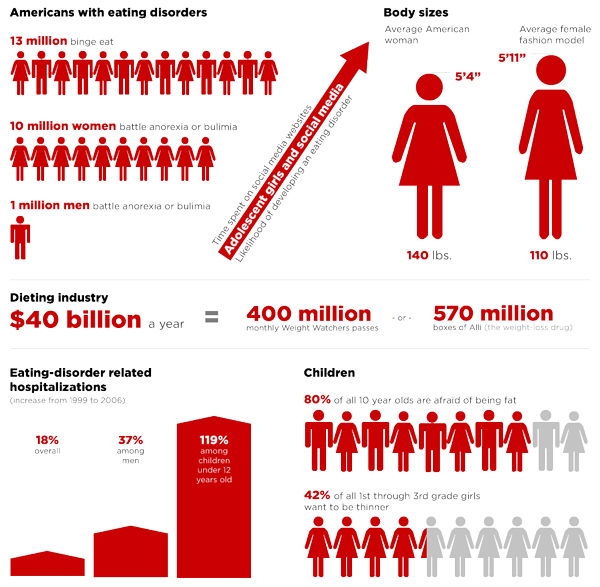 In order to overcome bulimia, one requires changing his/her attitude to the food and the diet he/she obeys. Hence, it is necessary to consult a nutritionist, who will compose the diet, including all specific needs of every client. First of all, this diet should consist of low-calorie foods; thus, one will lose, but not gain weight (Mayo Clinic, 2014). The mistaken understanding of a diet creates a stereotype that people, who obey diets, deprive themselves of the certain food groups. The diet should be balanced; it means that fats and carbohydrates should also be presented there, but in smaller quantities. According to this fact, a balanced diet should consist of the following elements:

According to this fact, a diet for a person with bulimia is very similar to the ordinary diet. The goal of the diet is to stabilize the balance between fats, proteins, and carbohydrates in the body and to lead to the natural loss of weight.

Bulimia Nervosa is more a psychological disorder, which has a serious impact on the physical state of a person’s well-being. Hence, the treatment of this disorder should be started from the psychological anabasis and mental help, if it is necessary, because the obesity itself is not the main problem; it is the consequence of a person’s inability to control his/her manner of eating (PsychCentral, 2014). The following graph introduces the main reasons as to why people cannot overcome their disorder. 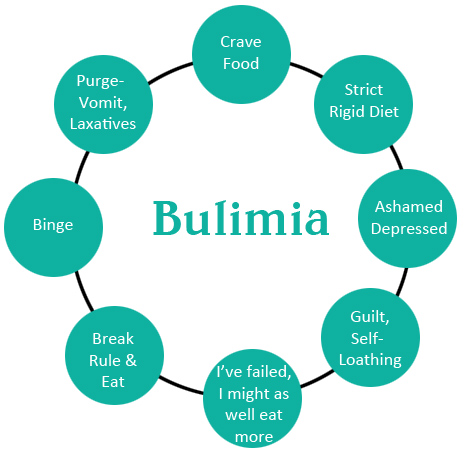 This graph presents the reasons that lead to the impossibility of treatment. First it is food and inability to say no to one’s abnormal appetite. However, too strict diet also has a negative effect, because finally even the strongest people give up. Secondly, it is breaking the rules and eating what one wants and when he/she wants. As a result, it increases the depressed state of a person, which complicates the treatment of bulimia.

People, who suffer from food disorders, associate food with emotions; thus, every time they are depressed or have a bad mood, they start eating in order to be happier. The process of eating brings them only temporary satisfaction and after it they feel even worse (The Harvard Medical School, 2014). Thus, diet only helps to lose weight, but it does not recover a person from bulimia. This disorder can be totally cured only on a mental level. A person should learn to control his/her feelings, fight with depressions and disappointments in a non-eating manner. For instance, exercises are the best solution in a stressful situation or when a person feels anxiety. After one hour of intensive exercises a person becomes happier because the body receives much endorphin, which stimulates good emotions. Moreover, a person may lose up to 500 calories and after the exercises, he/she has a desire to eat some healthy food, but snacks.

As a conclusion, it can be said that bulimia nervosa is a psychological disorder, which leads to the abnormal obesity and negative consequences, which they have on an organism. Hence, the treatment with drugs gives only temporary effect, because the person is the only one, who is able or not able to control his/her own emotions, hunger, and keeping a diet.